Roanoke Rapids Police Captain Bobby Martin used what he learned at Prevent Child Abuse North Carolina’s Protective Factors training to change the way he approached two juveniles allegedly partaking in illegal activity and ended up changing the young men’s lives, and his own. 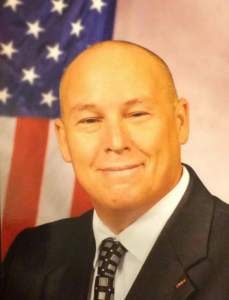 In 1991, Captain Martin graduated high school and followed in his father’s footsteps by joining the US Navy. After the Navy, Captain Martin knew he wanted to serve his country and give back to the community he grew up in, so he decided to test the waters of law enforcement.

Captain Bobby Martin is now captain over criminal investigations in Roanoke Rapids, NC by day, but when he isn’t in uniform you will find him in father mode spending any time he can with his wife and kids.

Captain Martin is also a member of the Halifax County Community Child Protection Team (CCPT)which “is a group of community representatives who promote a community-wide approach to the problem of child abuse and neglect.”

A day in the life of Police Captain

As the captain over investigations, Captain Martin reassures Roanoke Rapids citizens that their police department is there for them.

“Whether it’s a bicycle larceny or something else, we make a point to personally contact every victim to let them know we’re here, we understand that something has happened, and that we do care,” Captain Martin said.

Captain Martin makes his community feel supported by reaching out to every victim, but when Captain Martin took Prevent Child Abuse North Carolina’s (PCANC) Protective Factors training, he raised the bar even higher.

Raising the bar, and the standards, for the community

“It (the training) has opened my eyes to why things happen and what can lead someone to where they are now,” Captain Martin said.

Little did he know, his new perspective would offer him the opportunity and understanding to change the lives of two young men.

The confrontation that went from citation to conversation

One early morning in Roanoke Rapids, a 15 year old boy and a 16 year old boy were sitting at their school bus stop allegedly smoking illegal drugs. Captain Martin and another officer approached the two juveniles.

While the other officer was writing a citation for the 16 year old, Captain Martin thought about what he learned at PCANC’s Protective Factors Training. Instead of thinking “what’s wrong with you?” he decided to change the conversation to “what happened to you?”

“If you just ask a few simple questions, you get a little background to what lead them here instead of thinking inside the box all the time you can go outside of that box and get a lot of information,” Captain Martin said.

And that’s just what he did.

“I told the parents ‘I would like to meet with you so we can find out what’s going on with your sons’ and I left it in their hands,” said Captain Martin. The boy’s mothers both accepted the invitation and showed up at the police department a few days later.

“During our conversation I discovered that the boys didn’t have father figures in their life,” Captain Martin said, “I found out that this is something that has bothered them.”

Captain Martin talked with the boys and told them about his experience not having a father around for a portion of his life. The three of them instantly connected.

“We kind of hit it off,” said Captain Martin.

Captain Martin credits PCANC’s Protective Factors training for making this shift in understanding that he could do something to help these two boys using prevention strategies. He decided to become their mentor and be a positive male figure they could rely on.

The young men completed their required community service, but ever since the day they all sat down and talked with Captain Martin, the young men have been doing more. They met Captain Martin at an opioid epidemic forum and a town hall meeting about community and police relations, are now doing well in school, and have even gone over to the captain’s house for dinner.

“It’s because of the Protective Factors training that I was able to relate to these young men and their parents and so far it’s been positive,” Captain Martin said. “I’m not required to do this, I’m not paid to do this, but from the training I see that if I can help these two young men…it is something we can build off of.”

Captain Martin has high hopes for the parents and children of Roanoke Rapids, Halifax County, North Carolina, and the world. But those high hopes require more from each of us.

“I’m hoping that the parents and children in our community can grow and prosper; live good clean lives, and not be held back by barriers that we have in today’s society because at the end of the day we’re all human beings,” Captain Martin said.

Raise your standards for our state’s children! Donate to Prevent Child Abuse NC to invest upstream to help strengthen families and communities where children can thrive!